Based upon the diversity of our offered fields of law we consult besides private persons, small and midsized craft enterprises, freelancer, businessman also midsized and multinational enterprises  out of Germany or from abroad. The main legal focus of Mrs. Rechtsanwältin Helga Geerkens and Mr. Rechtsanwalt Ralf Frommen lays on the field of inheritence law, family law, road traffic law, building law, tenancy law, immigration law and labour law.

Rechtsanwalt Axel Krause speaks fluently German and English. In the following you will find information in both languages about his services.

In daily work we as Geerkens – Frommen – Krause (GFK) follow our maxim to serve our clients at best from all perspectives. Therefore our fundament is based upon the following principles:

We get to the point quickly for our clients, maintain high transparency in costs and consult on our main fields of law with more than 20 years of experience. 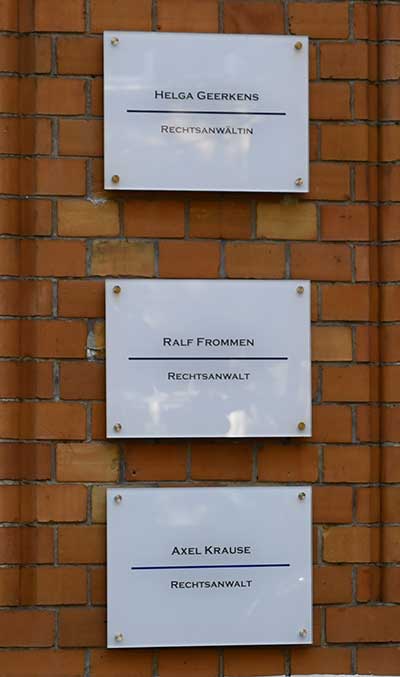 Let us work together