EU sanctions against Russia and the eighth sanctions package

On 6 October 2022, the EU put the 8th sanctions package against Russia into force.

I. Background to the eighth EU sanctions package

Russia thumbscrews are be tightened increasingly. The EU is responding to Russia’s sham referendums in the occupied Ukrainian territories, the further mobilization of Russian troops and Russia’s threat to use nuclear weapons in Ukraine.

The eighth EU sanctions package contains tightening measures in a wide variety of areas. These were mainly implemented through amendments to the two main embargo regulations that have been in place since 2014. On the one hand, this is Regulation (EU) No 833/2014 on restrictive measures against Russia and, on the other hand, Regulation (EU) No 269/2014 on measures relating to the territorial integrity of Ukraine. The latter regulation contains the list of names, persons, entities and bodies with whom no business may be done and whose assets are frozen.

The various previous EU sanctions packages and significant changes to the lists of names took place in a noticeably brief period of time in 2022 parallel to the Russian escalation and thus require companies to conduct short-term reviews of their products, business partners and, if necessary, adjustments to their processes. 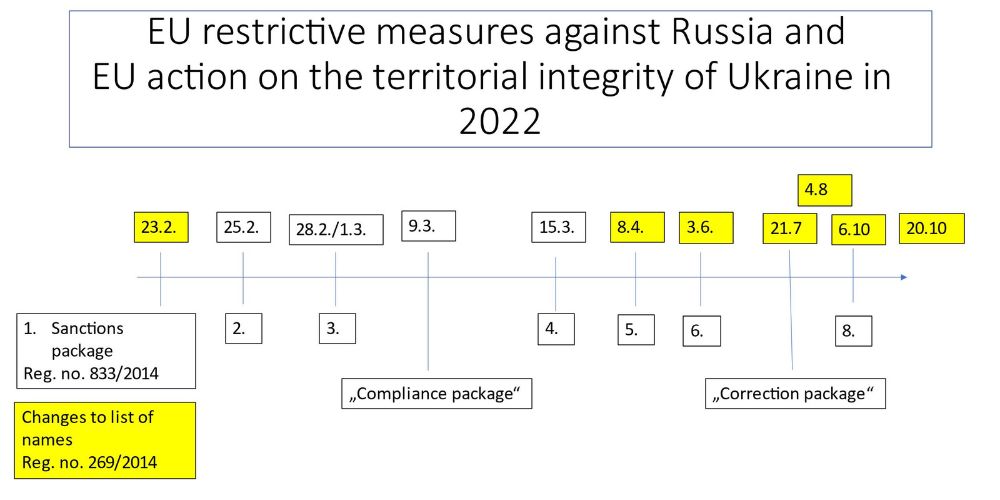 The amendments to the regulations usually enter into force on the first day following their publication in the EU Official Journal. As far as no so-called old contract clauses apply to previously agreed transactions and the only two-day grace period of § 18 Abs. 11 of the Foreign Trade and Payments Act for the ignorance of a ban is not applicable, the EU embargo is virtually “armed”.

Intentional violations of the embargo will be prosecuted as criminal offences. Since the first EU sanctions package, there have already been various investigations against natural persons in Germany, regularly the managing directors of companies.

The initial suspicion of the investigating authorities is always based on intentional conduct. In the course of the proceedings, however, it often turns out that there was only negligent behavior, and that people were simply overwhelmed by the short-term nature and complexity of the sanctions imposed and their review for their own products and processes than that they were intentionally violated.

Against this background, it is important for companies to maintain a corresponding Internal Compliance Program (ICP) for EU embargoes, such as the Russia embargo in particular, and for export controls in general permanently and according to their own risk.

With the eighth EU sanctions package, the following changes/tightening have entered into force:

1. Other persons have been added to the EU sanctions list, in particular those linked to the bogus referendums.

a. Extension of the export ban on Annex VII goods to include goods of Regulation (EU) 2019/125 (Anti-Torture Regulation), other chemicals as well as semiconductors and electronic components (Art. 2a)

c. Extension of the import ban on imports of iron and steel products listed in Annex XVII originating in Russia and processed in third countries (Art. 3g)

d. Extension of the export ban on aircraft components in Annex XI

f. Extension of the export ban to include coal products and other Annex XXII products (Art. 3j)

g. Price cap for oil and oil products and ban on shipping to third countries for oil and petroleum products (Art. 3n)

h. Extension of the general ban on transactions to the Russian shipping register

i. Prohibition of holding positions on the boards of Russian state-owned enterprises subject to a general ban on transactions (Art. 5aa)

j. Inclusion of bans on services to Russian entities for engineering, architecture, IT and general legal services (Art. 5n)

3. Creation of a new category in the EU blacklists for persons facilitating the circumvention of existing sanctions.

Especially with the last point of tightening, the EU Commission President, Ursula von der Leyen, expects a “great deterrent effect”. This increases the risk for individuals, including those in the EU, to become the focus of EU sanctions themselves as potential supporters of circumvention, with the same devastating economic consequences of such a listing.

Against the background of these further tightening and the realization that Russia is under increasing pressure to get the products from the EU that it so desperately needs to maintain its war against Ukraine and its economy, all kinds of circumvention and procurement attempts can be expected in the future. Companies should be prepared for this. The provision of an ICP – according to one’s own risk profile – is essential for this.