EU sanctions against Russia and the ninth package of sanctions

On 16 December 2022, the EU put the 9th sanctions package against Russia into force.

I. Background to the ninth EU sanctions package

In response to Russia’s ongoing war of aggression against Ukraine and the severe further escalation against civilians and civilian infrastructure, the Council adopted a ninth package of sanctions. The measures include, broadly summarized, the following prohibitions:

These tightening of sanctions were implemented again through amendments to the embargo regulations that have been in place since 2014. These are Regulation (EU) No 833/2014 on restrictive measures against Russia and Regulation (EU) No 269/2014 on measures concerning the territorial integrity of Ukraine. The latter regulation contains the list of names, persons, entities and bodies with whom no business may be done and whose assets are frozen.

The various previous EU sanctions packages and significant changes to the lists of names all took place in a noticeably brief period of time in 2022 parallel to the Russian escalation and thus require companies to carry out short-term reviews of their business partners, products and, if necessary, adjustments to their processes. 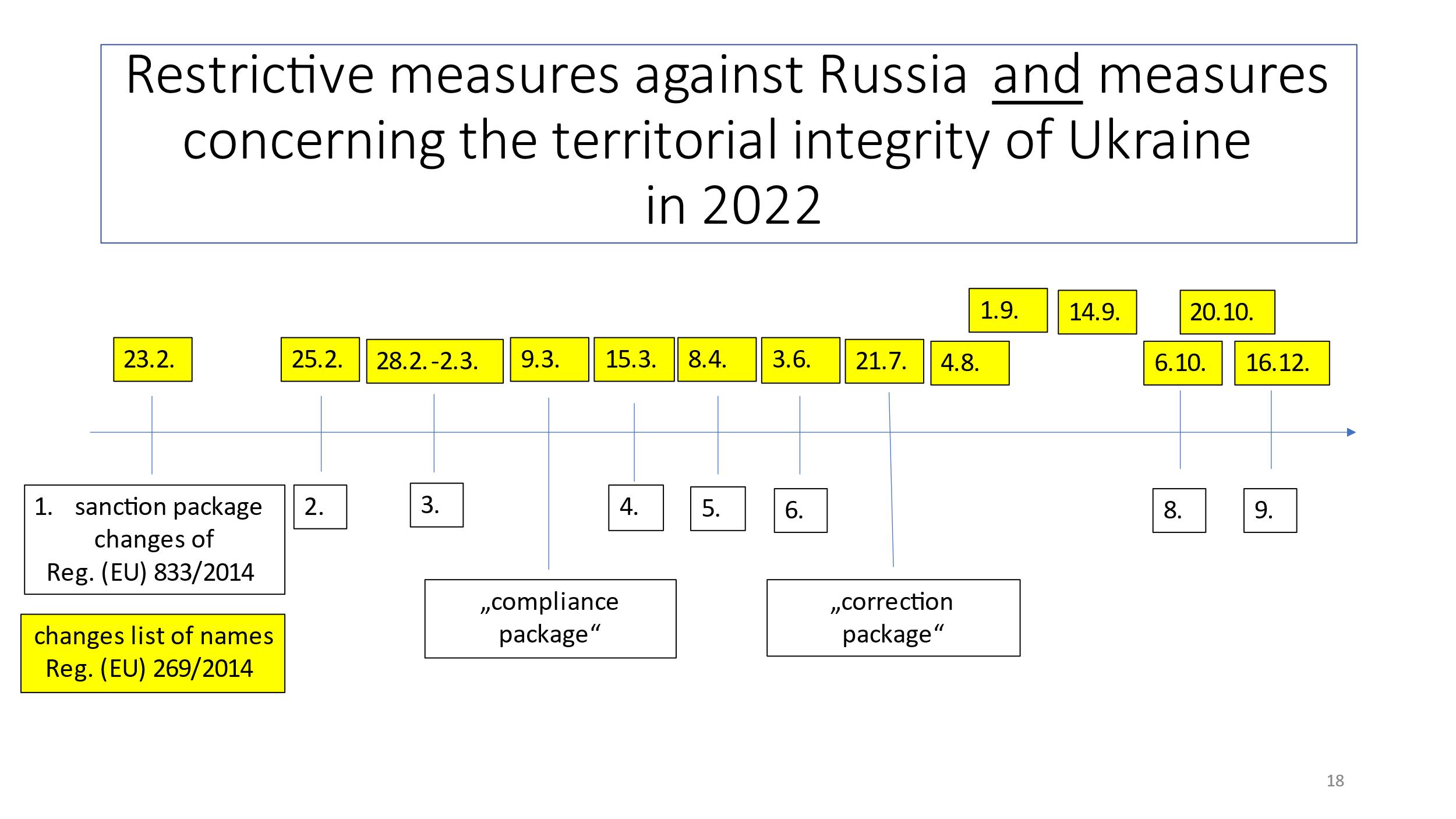 The amendments to the regulations usually enter into force on the first day following their publication in the EU Official Journal. As far as a prohibition is fulfilled and no so-called old contract clauses apply to previously agreed transactions, the EU embargo is virtually “activated”. In the case of ignorance of a new prohibition in the event of a violation, there is only a truly short two-day grace period according to § 18 Abs. 11 of the Foreign Trade and Payments Act.

Against this background, it is important for companies to maintain a corresponding Internal Compliance Programme (ICP) for EU embargoes – such as the Russia embargo in particular and also for export controls in general – permanently and according to their own risk.

With the ninth EU sanctions package, the following changes/tightening have entered into force:

2. The following changes have been adopted with regard to transactions such as imports, exports, investments, certain services, etc.:

a. Extension of the acquisition ban in relation to the mining and quarrying sector (Art. 3a para. 2 in conjunction with Art. 1x)

d. Extension of the service bans to include advertising, market and opinion research as well as product testing and technical monitoring (Art. 5n)

e. Inclusion of other items in Annexes VII, XI, XVII and XXIII

g. New derogations from import and export bans to facilitate exit from the Russian market (Art. 12b)

Against the background of these further tightening measures and the realization that Russia is coming under increasing pressure to get the products from the EU that it so desperately needs to maintain its war against Ukraine and its economy, all kinds of circumvention and procurement attempts can be expected in the future. Companies should be prepared for this. The provision of an ICP – according to one’s own risk profile – is also essential for this.

Almost simultaneously with the EU’s 9th sanctions package, the Sanctions Enforcement Act II (“Second Act on the Effective Enforcement of Sanctions”) came into force in Germany. Among other things, the new law provides for the creation of a new central office for sanctions enforcement in Germany, which will coordinate between the Bundesbank, the Federal Office of Economics and Export Control (BAFA) and the customs administration under the Federal Ministry of Finance. In particular, the aim is to better identify and secure funds and economic resources of listed persons, including many Russian oligarchs.

Regardless of the above changes, there are further considerations at EU level on how to deal with the frozen funds and economic resources of the Russian oligarchs and the Russian state (its central bank, etc.) in the future and how they could be used for the reconstruction of Ukraine in accordance with international law. A first step in this intended direction is a classification of Russia as a terrorist state, as already practiced by the EU Parliament in a corresponding resolution and demanded by the EU Commission and the EU member states as a whole.